What are the secrets of College Football, both the good and the bad? This year’s College Football rankings have Alabama at number one for a record of 10 years since 2017. The Auburn Tigers were ranked number 9 at the beginning of the season, then dropped down to 21 after the Mississippi State game. Currently, they are unranked in the top 25 polls.

Now, let’s talk football fans! Mrs. McCormick has always been very passionate about the Florida Gators. She never misses watching a game with her family. “I think my favorite thing about college football is really our family all getting together and celebrating the traditions of the football team and celebrating the success of the team because it’s a way for us to all bond and come together,” she enthused. On the other hand, Coach Haslam prefers the Auburn Tigers and although not a college team, the Tampa Buccaneers. He has been attending Auburn Football games since 1964. “My dad graduated from there, my older brother graduated from there, and then I graduated from there, so Auburn is more than just a football team. Auburn is a big part of the Haslam family life so it’s just embedded in my heart, you love it, love the place, love the campus, love the area, love everything about the school and the football team, so it’s more than just football. It’s just a culture I was living in.” For Coach Haslam, Auburn is simply a part of his family. Someone else who loves college football but also coaches football, Coach Brown has always been a very dedicated Michigan Wolverines fan! When asked what it’s like to coach the Academy Football team, Coach Brown reflected, “It’s pretty cool because you get to coach kids that have never played and our ultimate goal is to beat everybody and hopefully to win another State Championship.” He loves college football because he never knows what’s going to happen each Saturday. Freshman James Elverson enjoys watching college football but also is very energetic when it comes to playing high school football. James took some time to consider what it’s like for him, being on the school football team. “It’s fun because on the sidelines even if you’re not in the game, the team gets really hyped about stuff.” When James is playing, he plays wide receiver and quarterback. Unfortunately, James and his brother Will had to leave after the first semester. He is missed, not only by his classmates but his teammates as well.

Many news outlets believe that the Gators are still coping over the awful loss to Georgia in 2017. That same year, Jim McElwain was fired. Although the Gators had a tough year, they finished the season on a high note. If you’re a college football fan, what is your favorite team? Do you think they have made great progress so far in the season? Do you play on a football team? If so, tell us a little about that experience. Please respond in the comments below. 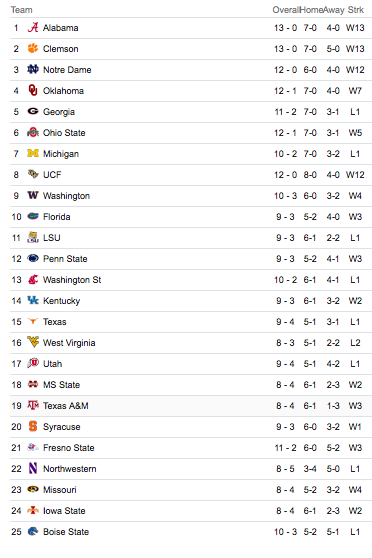 Comments? Thoughts? News to share? Email us at 6C Publishing.

You can reach Ms. Upmeyer, the advisor here.